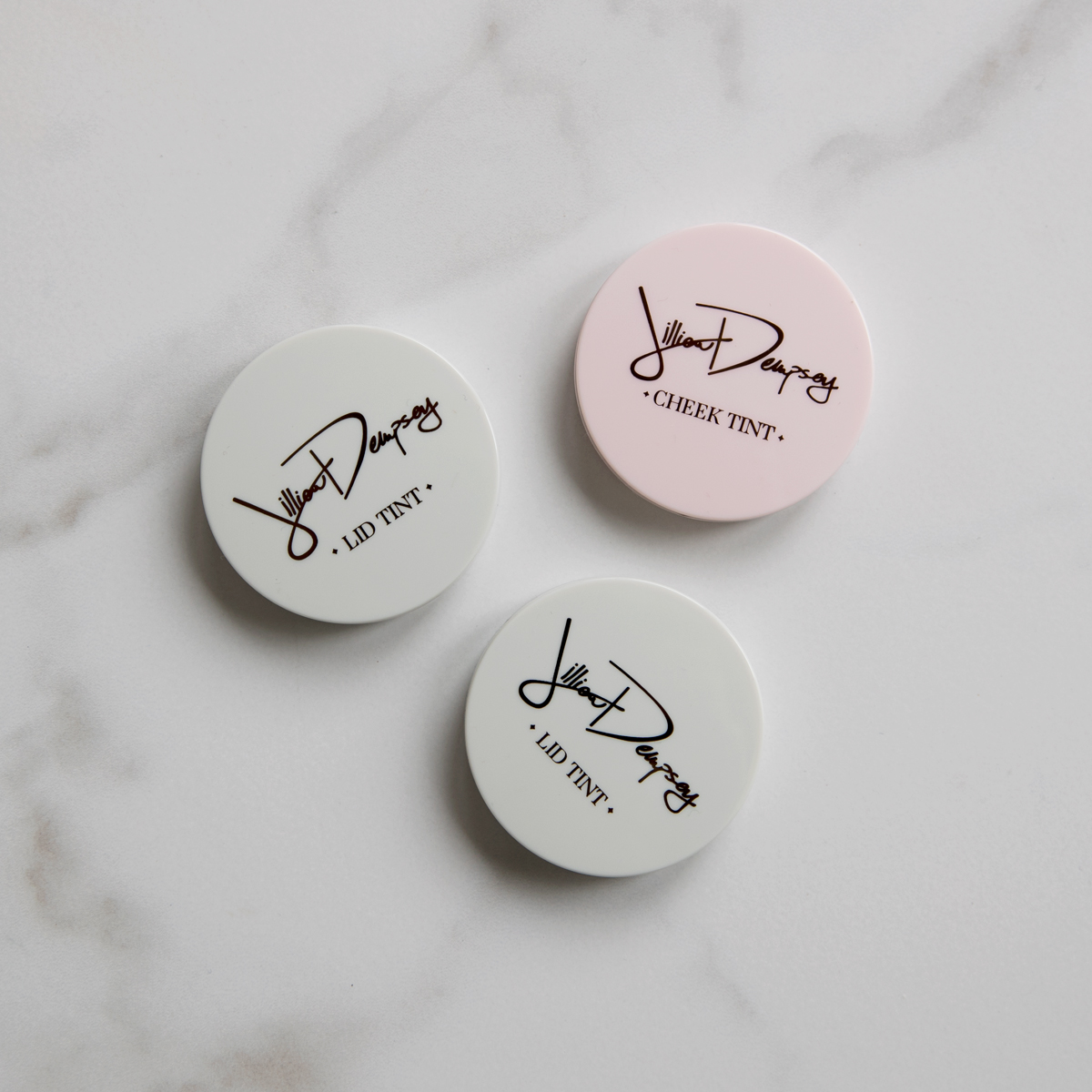 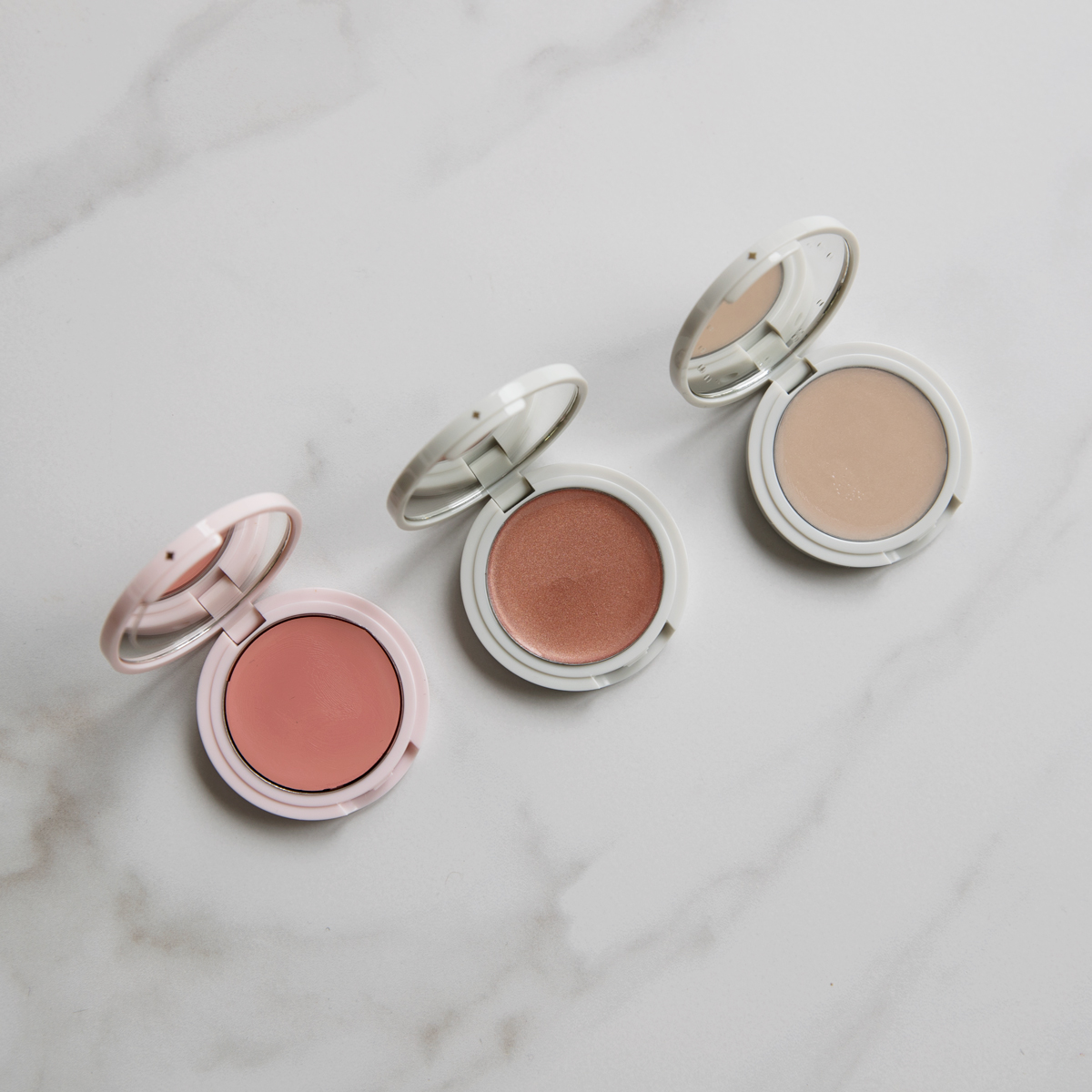 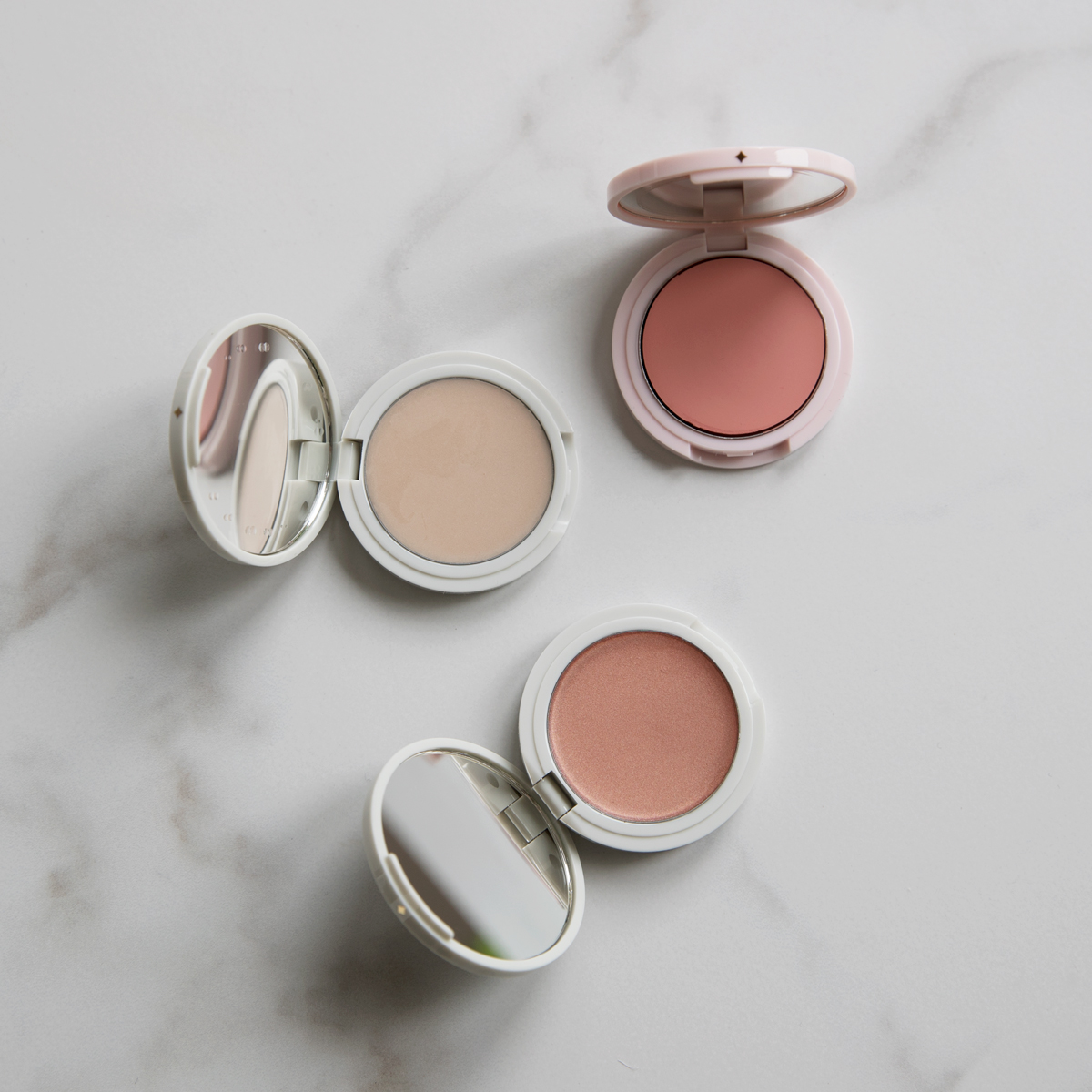 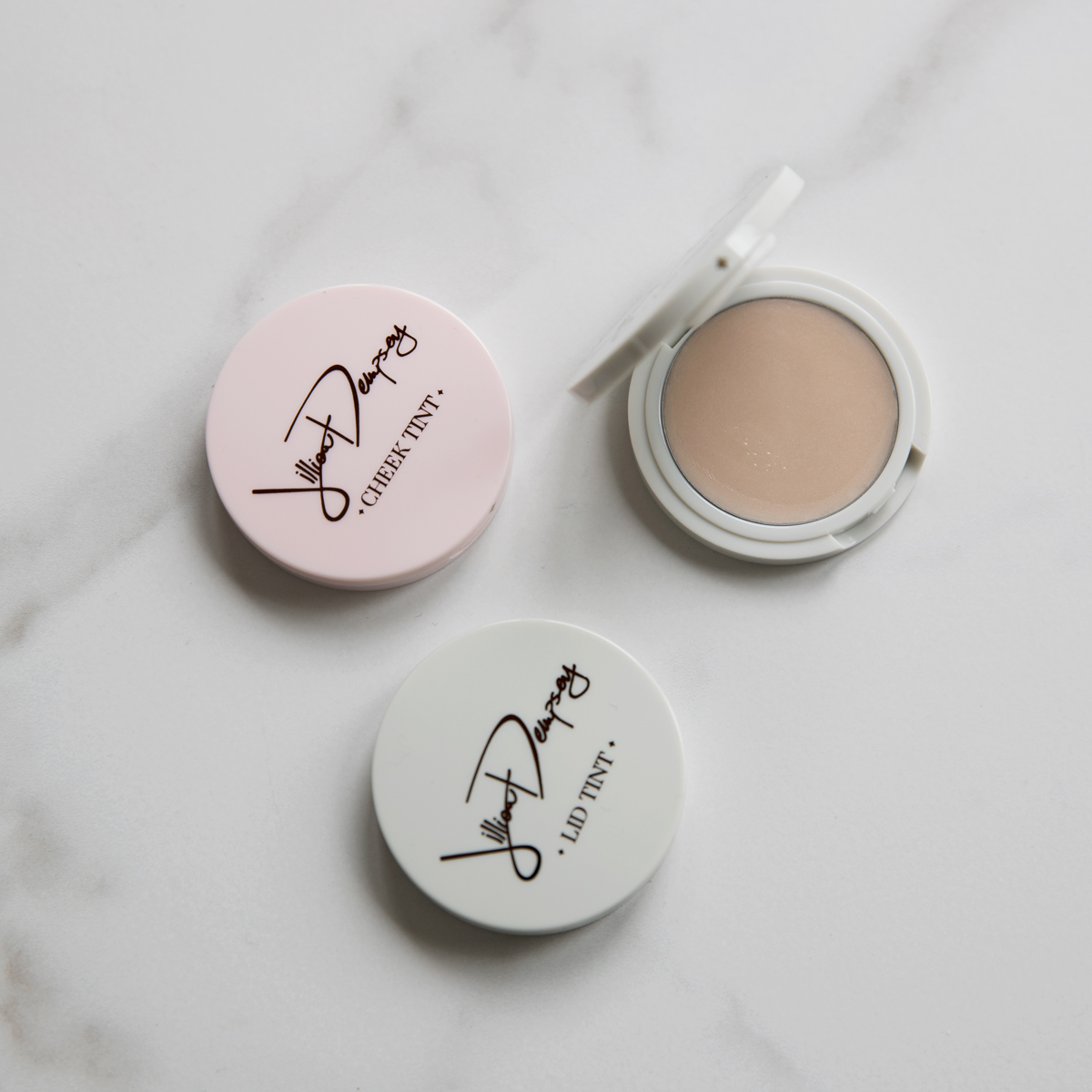 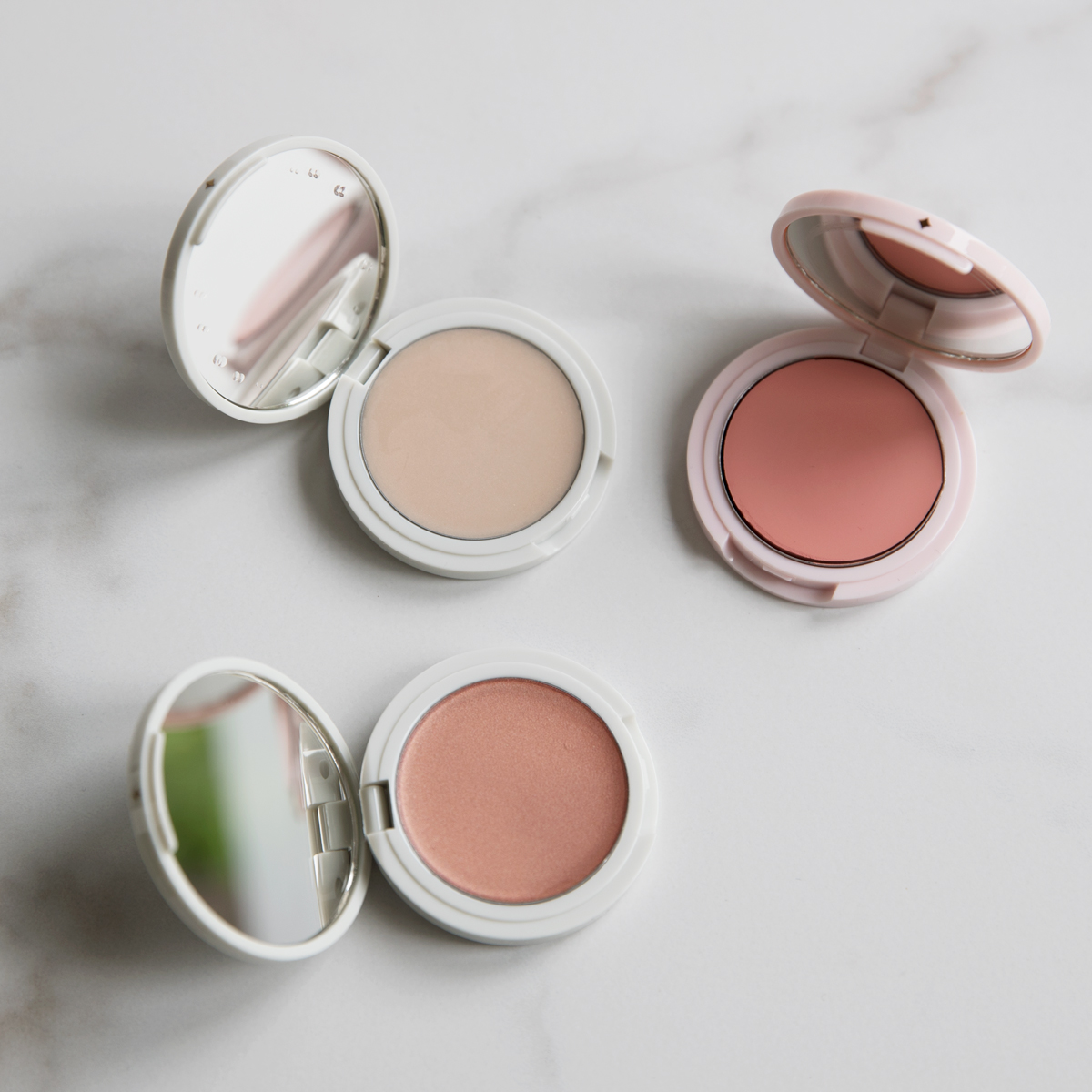 I’ve been meaning to write about these little pots for quite some time.  My opinion has swung so far from one side to the other that it’s been hard to lock down my true thoughts on Jillian Dempsey makeup. So I have decided to just lay it all out there, the good, the bad, the things I disliked one day and loved the next, and vice versa, without any kind of conclusive should I buy it outcome. That, I’m afraid, I just can’t help you with on this one.

As a Hollywood makeup artist, Jillian Dempsey has painted lots of young celebrity faces, but she started with stints with brands such as Avon and Shu Uemura. In 2015 she released the beginning of her own organic makeup line with kohl eyeliners. A year later came the famous lid tints, followed by the cheek tints. I’m yet to try the Gold Sculpting Bar which looks right up my alley, but have dipped into the makeup. What I love about Jillian Dempsey is her lack of desire to create an entire line saturated with products in every category – give me a tightly edited collection any day.

Before anything else, there’s the packaging. Reading about Jillian’s history with Avon made sense when I saw the somewhat vintage feeling pastel-coloured pots. Muted green and blush pink might look modern now but they very much gave me some 60’s Avon vibes. The pots are slimline, travel friendly, have a mirror (bonus) and have wonderfully clickable lids. More than anything, they just feel nice in the hand. I wouldn’t say they feel luxury, but I like them – I really like them.

My initial impression of the Cheek Tint and Lid Tints was the overwhelming fragrance. There’s no getting around it. On first use I actually considered that they might have been on the shelf too long, or gone bad in transit, but the second time I found the scent to be more dessert-like, akin to the vanilla cake fragrance that accompanies a lot of lipsticks. Good or bad, and it leans more on the unnecessary side for me, the fragrance lingers on the skin, so you’re going to want to like it. I personally, don’t.

I chose the Cheek Tint in Petal, which is a lovely shade for my fair skin tone, sitting somewhere between a salmon pink and muted coral. On my cheek it shows a bit more pink, but overall creates a very natural flush. Texture-wise it’s creamy, but not overly slippy. It takes a little more blending than a Bobbi Brown Pot Rouge, and isn’t quite as thin feeling as a Milk Makeup blush stick. When I’m wearing foundation I find the amount of blending required is a little disrupting to my base, but on a bare face it smooths on naturally and looks skin-like – not overly dewy but not matte.

The Lid Tint is what really lured me in, initially.  Glossy eyelids are an acquired taste, looking amazing on magazine pages but undoubtedly messier in real life. Never is texture so important – too gloopy and it slides all down your face, too dry and you might as well use a powder.

The Jillian Dempsey Lid Tint isn’t so much of an eye gloss but an eye shine. It isn’t a liquid in the way that the Beauty Blender Glass Glow Shinelighter is, but sits closer to Surratt’s Lid Lacquers – even a touch less glossy. Think of these more as illuminating, rather than wet-look, eye colours. I went with Glimmer, a warm pinkish copper that I had hoped would be slightly less rust and slightly more bronze, and Dew, a transparent clear I like using alone or above other shadows.

The Lid Tint is easy to swipe on and you can be haphazard with application. They can be thinned out so you achieve just a hint of colour, or layered and layered for more impact. I really like the texture when applying them to my lid and find they fill a void between my cream eyeshadows and full-on sticky glosses. I don’t reach for them as much as my Chanel Ombre Premiere Glosses but perhaps that inescapable fragrance is the main culprit here. Tellingly, I also don’t feel an overwhelming desire to pick up other shades from this line.

These aren’t long-wear eye colours that will look the same on the eye an hour after application. I do have to do some fingertip touch-ups where they crease, but if you like the lived in, lazy girl makeup look this mightn’t worry you. My pick of the bunch is Dew, for it’s universal wearability. I like it on a bare lid to add the look of shine and overall dewiness, but also love it on top of other eyeshadows. If you’ve been wishing Surratt would release a straight clear Lid Lacquer, say Kira Kira without the glitter, then Jillian Dempsey’s Dew might be your answer – but so might a swipe of an RMS Eye Polish or Living Luminizer. Or Beauty Blender’s Shinelighter, come to that. And that’s the thing: we don’t have to settle for like when we can have love. In a market so saturated with beauty products we have the luxury of shopping around until we find something we love 100 perfect – fragrance and all.

Have you tried Jillian Dempsey makeup? Let me know your thoughts on Instagram.